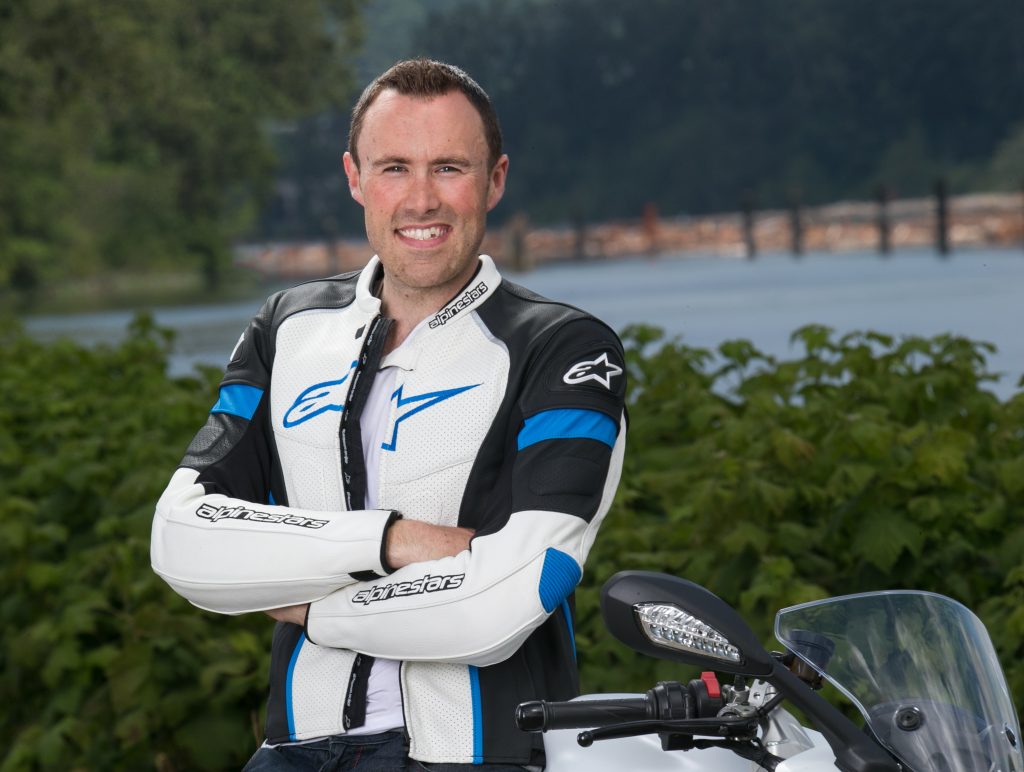 Lee learned to ride in 2005. Within two weeks of never sitting on a motorcycle he had his full class 6. Soon after he bought a 1989 Honda CB1 as his first motorcycle. Lee loves touring on his motorcycle and taking it to the track. Keeping himself and others safe has always been a priority.

Trips and Track Days are what Lee loves to do the most on motorcycles. Most of his motorcycling kilometers have been spent outside city limits in the Western United States, and even as far away as Mexico, Australia, Vietnam and Thailand. Organizing multi day rides with several other riders has been common place. One of Lee’s favorite rides was leading 25 riders through the state of Oregon and leading them all home safely. When it comes to the track, he doesn’t race. The track is where Lee can push the limits of the motorcycle and himself to learn.

Lee has also written two books on motorcycling. Your First Motorcycle & The Adventures You’ll Have Riding Motorcycles. Available in audiobook, ebook, and paperback. You can see all his adventures, articles and interviews at www.ridefar.ca.

In his past life he was a financial planner and left that to start 1st Gear Motorcycle Training. Not only can he teach you ride but he can help you with the “numbers” of motorcycle riding. Owning and Riding a motorcycle can be expensive. Lee knows how to do it in the most cost efficient way possible. This includes the numbers behind insuring your motorcycle, insuring yourself, buying/selling motorcycles, and spending wisely.

Lee is also a forever student as well. In the recent past and currently, he has taken dance, piano, trampoline, aerial silks, and personal training. Always being a student ensures he never forgets what it is like to be the one learning. There is nothing Lee would like more than to see his students have long, safe and fun experiences on their motorcycles just like he has. 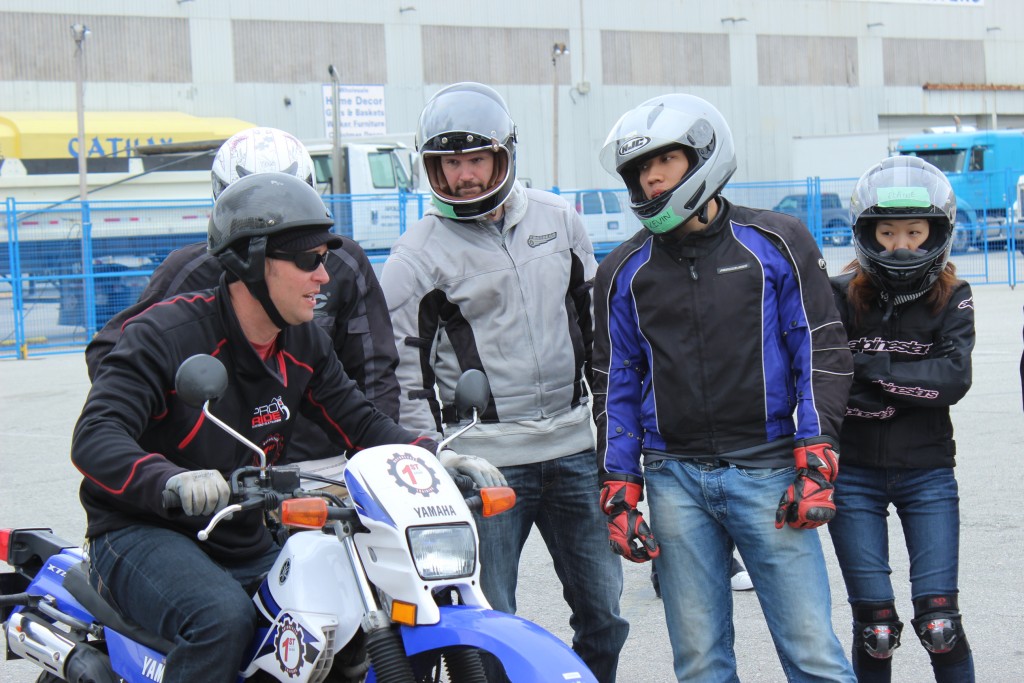 Lionel must have motorcycles in his blood; he comes from a long line of Riders and brings over 16 years of riding experience to 1st Gear Motorcycle School. He was also an Instructor at ProRide Motorcycle Training in North Van before coming to 1st Gear. He has ridden in 4 different countries on a plethora of different bikes. Lionel is a consummate urban rider logging many years of riding in both a city and rural environments. Currently his bike of choice is a Kawasaki Ninja 400.

His teaching experience also includes 9 years of First Aid and SCUBA Diving instruction, and his personality is said to lend itself naturally to teaching. Outside of riding Lionel enjoys all things active and outdoors: from snowboarding and snow shoeing in the winter to kayaking, hiking, and running in the summer. 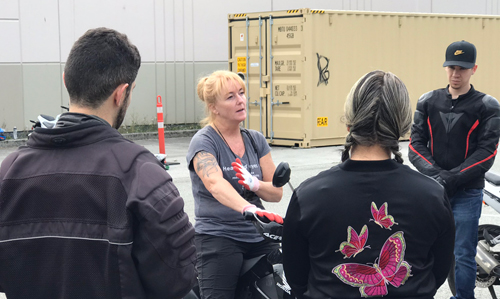 Mel’s love for motorcycles comes naturally from her Dad who had her as a passenger before she was even born.  In 1997 she decided that being a rider and having a bike of her own would be considerably more fun.  She was right!

Since then she’s owned a few different makes and models, the latest being a Suzuki GSX-R 750.  Mel firmly believes “Choosing a ride is a very personal thing…like choosing a wine.  It’s not about what someone else enjoys, it’s what feels (tastes) good to you.” Mel is nurturing and patient with her students and enjoys adding humor into the mix every chance she gets.  During the week she runs a dental office and when she’s not with us at 1st Gear, she enjoys spending time with friends/family.  Some of her interests: Yoga, red wine, sunshine, dogs, clean sheets, cake batter flavored ice cream and laughing till it hurts. 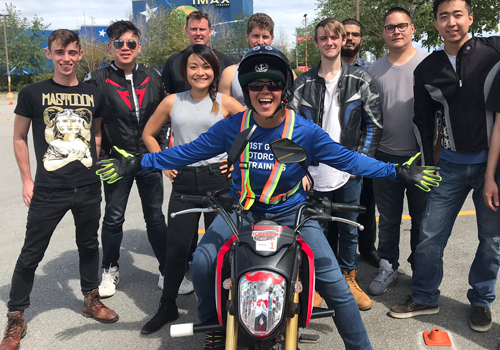 Carol was very much a tomboy growing up. From racing/jumping bmx bikes to playing baseball, track and field, snowboarding, skateboarding, and martial arts, she always wanted to beat all the boys (still does). Envisioning herself on a motorcycle was no different.

Self taught to understand the concept of the clutch and throttle, her very first experience with a motorcycle was in 1993.  A friend had asked for help piecing back together a 1981 Honda CT-70 motorcycle. Once fixed, with no training whatsoever, she rode it without a helmet or any protective gear.   Leaving behind a huge trail of blue smoke and enough noise to shatter windows, her heart beating wildly, she knew she was instantly addicted. Nowadays, she would never recommend or suggest anyone ride without protection and is a huge proponent of ATGATT (all the gear all the time).

The road to becoming an instructor came closer when after a series of life events, she needed to make a change.  After years of Lionel begging her to become an instructor and teach for him, Carol quit the rat race in 2017 and went on to pursue her motorcycle passion and became a fulltime instructor with 1st Gear in 2018.  With 24 yrs of riding under her belt, she wants to share and pass on the passion to new riders, while instilling safety and having fun.

Carol recently teamed up with ICBC in May 2019 and made a motorcycle safety P.A video found at https://www.icbc.com/road-safety/sharing/motorcycle-safety/Pages/Default.aspx 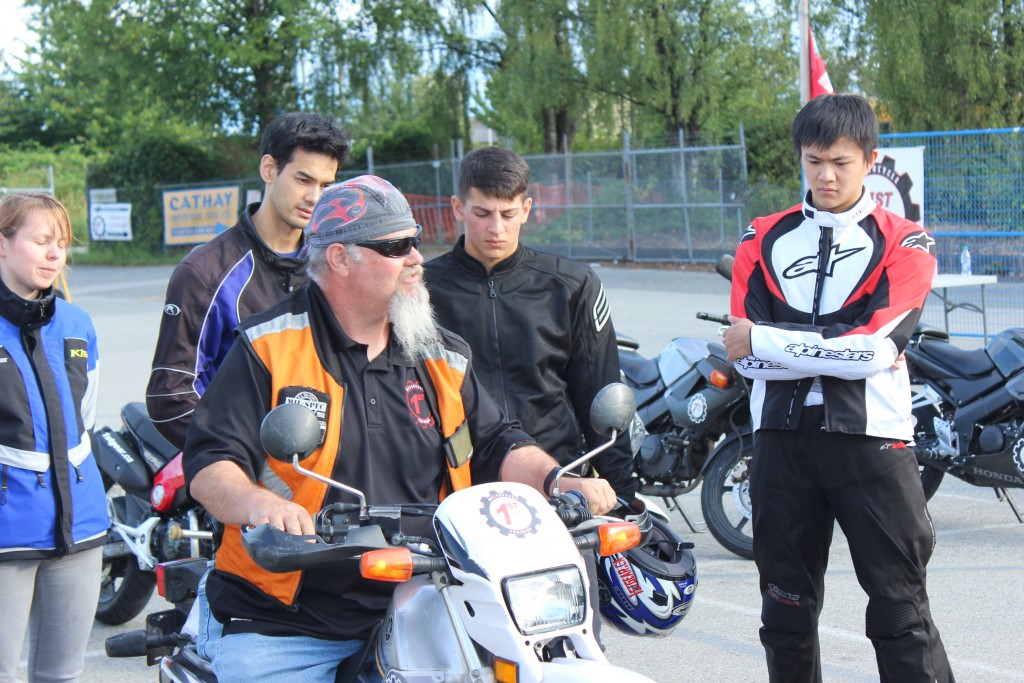 It was at first sight when Adam received his first motorcycle at the impressionable age of six and his love for motorcycles has never diminished.

Over the years he has owned and built a large variety of motorcycles and is very passionate about mechanical improvements and trying to make each bike work as well as it can. Similarly he is a firm believer that riders should constantly strive to improve their riding skills through continued training and practice.

Adam also teaches advanced rider training at Roadcraft Motorcycle Academy and feels the knowledge he brings from the more experienced riders is of great benefit to the new riders that cross our path here at 1st Gear.

“Building skill and confidence in new riders is extremely important and I feel honored to be a part of that process. Riding should be fun and also as safe as possible.” 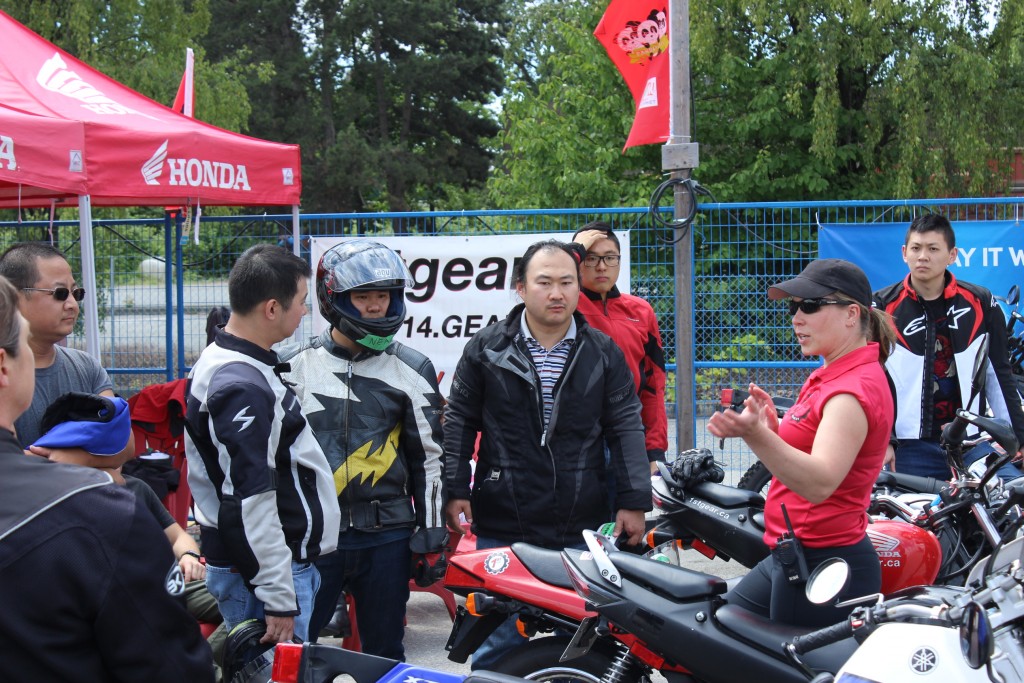 After being a passenger on a bike, Nicola decided to venture into being coming a rider herself. Within 2 months of walking into a riding school, she had her riding license and had bought her first motorcycle.

Through the years, she developed a passion for long distance riding, both solo and with friends. She has fully embraced motorcycling, becoming an all season rider from early on and commutes in addition to long distance riding. As a year-round rider, she always had an excellent set of both rain gear and heated gear on hand.

Nicola has a passion for the outdoors and adventures, and takes life by the proverbial horns. She currently rides a Yamaha Fazer 8. Check out her article on why she chose that bike here: https://1stgearmotorcycleschool.ca/whyiupgradedmymotorcycle/ 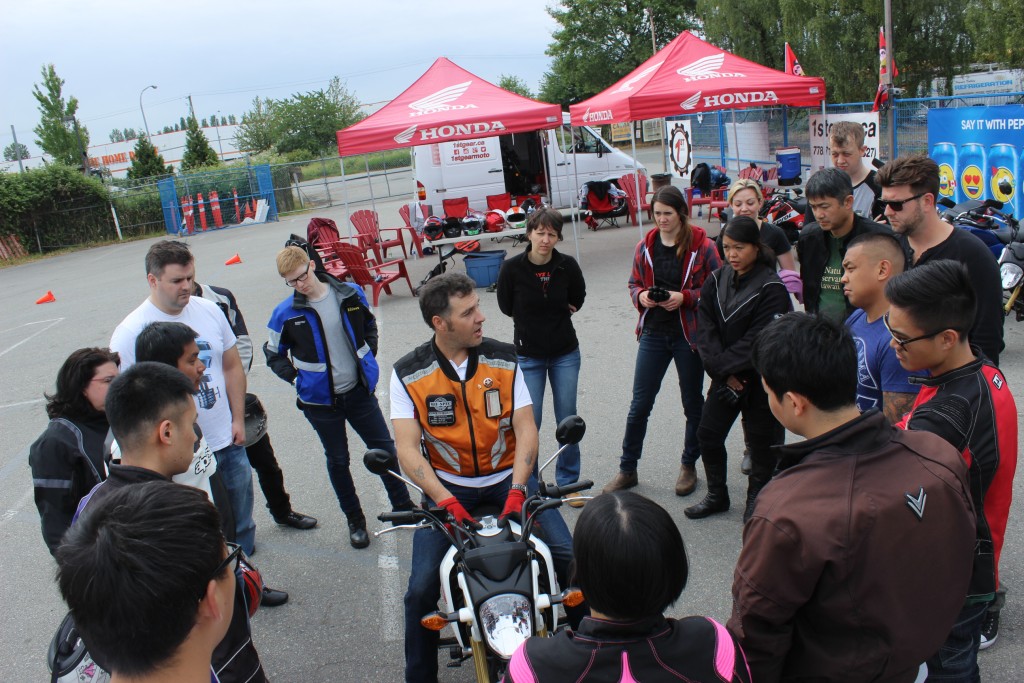 Patrick was born in to motorcycling. All his uncles rode and put him on the tank of a motorcycle for a ride when he was 3. He rode his first motorcycle by himself the summer he turned 5 and has never been without a motorcycle since. Patrick decided to become an Instructor the end of 2015 to instill his decades of riding knowledge on others.

Patrick raced motocross in the interior of BC until he was old enough to get his road license then it was on to road racing motorcycles for a decade. Even though he stopped racing, he never stopped riding, logging in hundreds of thousands of kilometers on several different GSXR’s, the bike of his choice until 2008. After that it was on to the Italian’s and other European motorcycles. His current 2008 Ducati 848 has just over 100,000kms on it and still running strong. He divides his riding time between that 848, a 2015 triumph Daytona 675 and a newly purchased Aprilia RSV4 Factory.

Patrick really enjoys talking/typing in the third person…..just don’t tell his therapist!!Patrick was born in to motorcycling. All his uncles rode and put him on the tank of a motorcycle for a ride when he was 3. He rode his first motorcycle by himself the summer he turned 5 and has never been without a motorcycle since. Patrick decided to become an Instructor the end of 2015 to instill his decades of riding knowledge on others. 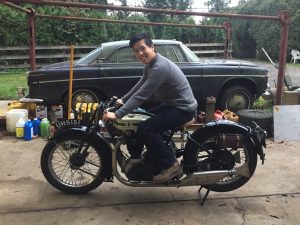 Christopher is a life long gearhead. His father, a keen supporter of child labour, had Christopher reaching for hard to access bolts on a wide array of vehicles from a young age. Later in life, his interest in four wheeled vehicles expanded to include two and after attending the course at 1st Gear he’s been riding ever since.

His interest in vehicles is vast, with a slight bias towards the old and quirky. Ask him about his jazz vinyl collection if you want to know what a hipster stereotype he his. In the warmer months he is most likely to be found loping along on his 1977 CB550k. Otherwise you’ll likely find him elbow deep in an old Land Rover, kicking thai pads at the gym, or indulging in a bit of self-deprecation. One day he intends to put his degree to use and actually code something other than csv sorting programs, but that remains to be seen.

Christopher is excited to teach and eager to share the knowledge he has been lucky enough to acquire from more experienced riders. 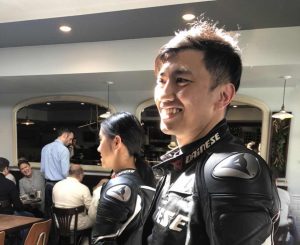 Ben and his wife’s first Valentine’s gift to each other was getting their motorcycle license together. Ben’s first bike was a 2004 CBR 600RR, then moved onto a 2016 Kawasaki ZX6R. He loves taking his bike to the track with his wife, and loves talking about how to ride through every corner. Ben likes to ride, golf, enjoy the sun in the summer, and he likes to snowboard in the winter. Ben is also a CASI level 1 snowboard instructor. Ben enjoys working on his own bikes during his free time, and he is currently working on his/her Yamaha R3 for him and his wife for the track this summer. Ben is fluent in Cantonese and Mandarine, and he recently became a motorcycle instructor after falling in love with this sport for a few years. 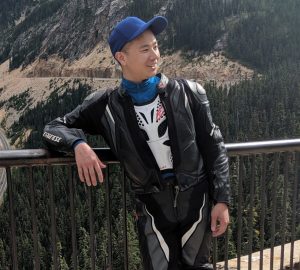 Canic was an avid cyclist, from riding road bikes to mountain bikes and rides to horseshoe bay or bombing down whistler, he always knew he wanted to get out on two wheels. His two-wheel evolution into motorized travel started in 2013 where he bought a Kawasaki Ninja 400r. After 2 years, he foolishly upgraded to a Triumph Daytona 675 and has been riding it ever since.

Its time for a new bike he has thought long and hard about the next bike, one thing is sure, adventure is around the corner.

His passion to teach extends past what he does at 1st gear, he teaches and coaches both archery and rock climbing at his local gyms. Being active and outdoor is a massive part of his life and takes pride in taking his motorcycle out and doing something active whether it be canoeing in widgeon or hike up the chief.

Canic’s longest single-day ride lasted 18 hours, which involved a cold morning, a hot afternoon, and a thunderstorm in the evening. He loves where motorcycling can take you, far or short, there is usually a story.